Bitcoin (BTC) starts a new week in the shadow of a deepening geopolitical nightmare unfolding in Ukraine.

As retaliation for the Ukraine invasion and the macroeconomic consequences grow, crypto by and large is struggling to keep up.

A curious paradox has presented itself this month. Despite investors and those directly impacted by the war assumedly looking for a safe haven, that has broadly not been Bitcoin or even stablecoins.

Instead, stocks, which have taken a hit thanks to sanctions and their consequences, now form a major guide for how BTC/USD performs.

As such, the trend for Bitcoin remains down, all within the same familiar macro range which has characterized all of 2022.

What could switch things up? Cointelegraph takes a look at a handful of factors worth keeping an eye on as the unprecedented European conflict plays out.

Historical precedent aside, it has become clear that the stock market does not “like” the current European hostilities.

Losses mounted last week, with global equities in total shedding $2.9 trillion of value. Add to that a warning that indices still seem expensive for the current environment and the midterm picture starts to look decidedly unappetizing.

It is not just what has already taken place, which is rocking the boat, but new sanctions against Russia are on the table, among them some serious issues that would only be felt on longer timeframes, should they come to fruition.

Among them is a ban on Russian oil imports, a move set to upend the global status quo and trigger a seismic shift in how the economy fuels itself.

“If this happened. I would think there’d be a high probability of stocks limiting down immediately off the news,” popular trader and analyst Pentoshi reacted to news of the idea that dropped over the weekend.

Pentoshi had already sounded the alarm for stocks going forward, raising the concept of a Wall Street Crash-type event triggering a modern-day counterpart of the Great Depression.

While an extreme scenario, there is nonetheless little to be bullish about while the conflict remains unresolved and the fallout worsens.

#Bitcoin May Revisit $30,000, But What of the #stockmarket? Down about 2% on Sunday morning 8am EST from Friday’s close, Bitcoin is indicating another rough week for risk assets – pic.twitter.com/FEj7hLQ08j

Comparing BTC/USD to the Nasdaq, in particular, this year, McGlone did not have the opinion that the only way is down.

“With 2002 losses less than half those for the Nasdaq 100, Bitcoin may be maturing toward global digital collateral.”

Should that be the case, Bitcoin hodlers are in for a choppy ride in the coming days.

Sensitive stocks combined with rocketing commodities prices — an atmosphere of stagflation in the making, some say — hardly provide fertile ground for bullish sentiment.

Overnight on Sunday, BTC/USD wicked down to $37,592 on Bitstamp, marking its lowest levels since late February and wholly erasing its subsequent gains.

Even more frustrating is that the entire move was a repeat of a previous one, cementing the current price range as more definitive support and resistance.

A look at the daily chart from Cointelegraph Markets Pro and TradingView shows just how persistent the range has been — in order to exit it, a breakout above the yearly open at $46,200 is needed. 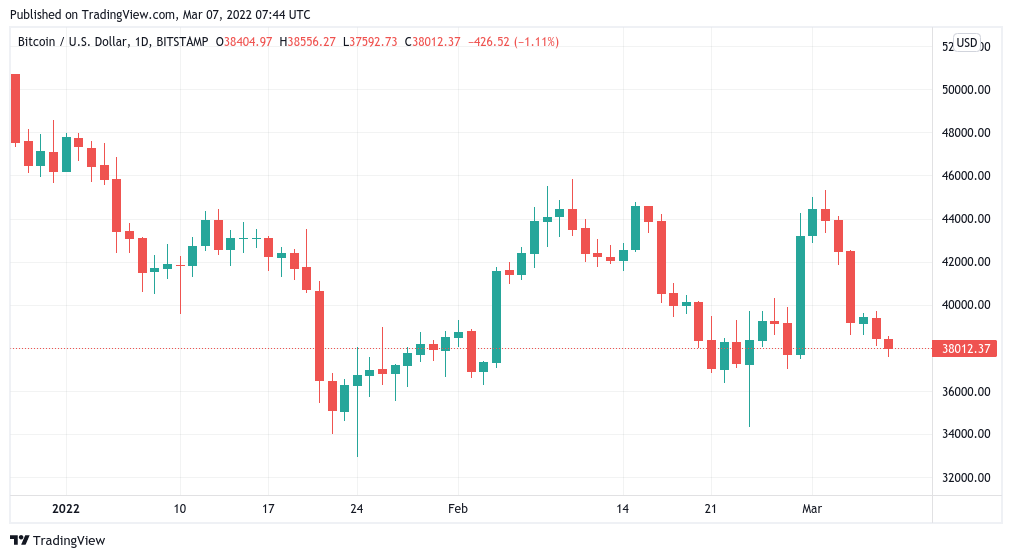 For trader Matthew Hyland, however, the immediate picture suggests that such a move is unlikely.

“Bitcoin has fallen below the crucial support zone,” he warned on Monday, showing the various price levels he argues figure as support and resistance in the range.

#Bitcoin has fallen below the crucial support zone: pic.twitter.com/nmBTby77um

The latest of those to go — around $39,600 — happens to coincide with Friday’s closing price on CME Group’s Bitcoin futures market.

Given Bitcoin’s propensity to return to Friday close levels the following week, the area just below $40,000 could thus form a focus on Monday, laying the foundations for a support/resistance flip should the bulls gain momentum.

“Great choppy movements of Bitcoin, but in the end it will come back to the price of the CME close of Friday evening,” Cointelegraph contributor Michaël van de Poppe summarized.

In a subsequent tweet, van de Poppe joined McGlone in predicting a “volatile” week ahead.

Where would the current narrative be without the topic of inflation?

What began as a “temporary” phenomenon has mushroomed into a cornerstone feature of the economic landscape this year — something many crypto industry participants predicted in advance.

The Federal Reserve is now stuck with it and has been criticized for failing to act quickly enough.

Thus, despite the Russia fallout, lawmakers are eyeing a rate hike this month and a decision will come on March 16. Prior to that, tension for Bitcoin may increase as last-minute bets keep traders guessing on the outcome for risk assets.

Mr. Market is saying no to a 50bps rate hike in March and yes to a 25bps hike – that means that the risks headed into this month’s Fed meeting are (imo):

Should a 25 basis point hike be enough to maintain the status quo for Bitcoin, it may already have come too late.

Prior to the Fed announcement, the latest Consumer Price Index (CPI) data for the United States is due to hit. Any major deviations from the forecast could upend the delicate balance.

Already at 40-year highs, CPI became infamous last month as Bitcoin put in multiple fakeout moves in the hours after the monthly numbers were released.

Extreme, but not extreme enough?

A familiar face shows just how big a hit crypto sentiment has taken in recent days.

As BTC/USD fell from the top of its range, the Crypto Fear & Greed Index fell with it, right back into the “extreme fear” zone.

The bullishness in early March is clearly visible on the Index, which more than doubled its normalized sentiment score to reach 51/100 before proceeding to lose it all again and reach just 22/100.

Fear & Greed uses a basket of factors to depict the crypto mood and currently suggests that there is room for further deterioration, as local market bottoms tend to be accompanied by a score of around 10/100.

“It‘s a short visioned market, meaning that the horizon is maybe a few days, and sentiment switches,” van de Poppe added about the current setup.

In a jibe at weak hands, popular trader Crypto Daan argued that even a collapse to $20,000 would not constitute a major trend violation on long enough timeframes for Bitcoin.

“A backtest to 20k, technically wouldn‘t be bad at all. Not nice for sentiment, but technically nice back test,” he tweeted Sunday.

How on edge are hodlers really?

As ever, there is a clear line to be drawn between long-term and short-term BTC investors, with the former still stubbornly riding out the comedown from all-time highs.

One key metric supporting the view that confidence in Bitcoin does not match the price is Reserve Risk.

Created in 2019, Reserve Risk pits sentiment against price in a way that shows when to invest in order to have a good chance of producing what on-chain analytics site LookIntoBitcoin calls “outsized” returns.

Currently, BTC/USD is heading back into the green “buy” zone, indicating that conditions favor long-term investors once more — high confidence and low price.