Kazakhstan, one of the world’s top Bitcoin (BTC) mining locations, is likely to lose its BTC hash rate share leadership in the next hash rate distribution update, according to industry experts.

According to Cambridge Bitcoin Electricity Consumption Index (CBECI), Kazakhstan was housing over 18% of the world’s BTC hash rate as of August 2021, following only the United States.

Kazakhstan’s BTC mining power increase was partly driven by the massive Chinese miners’ exodus triggered by China’s cryptocurrency crackdown. Prior to falling to zero as of August 2021, China’s BTC hash rate power accounted for more than 75% back in 2019.

But despite many Chinese BTC mining giants like Canaan and BTC.com moving operations to Kazakhstan in 2021, the country is likely to lose its hash rate share due to many reasons eventually, according to several industry execs. This would likely result in Kazakhstan dropping out from the top three BTC mining countries in the next CBECI update, expected to be released in March. 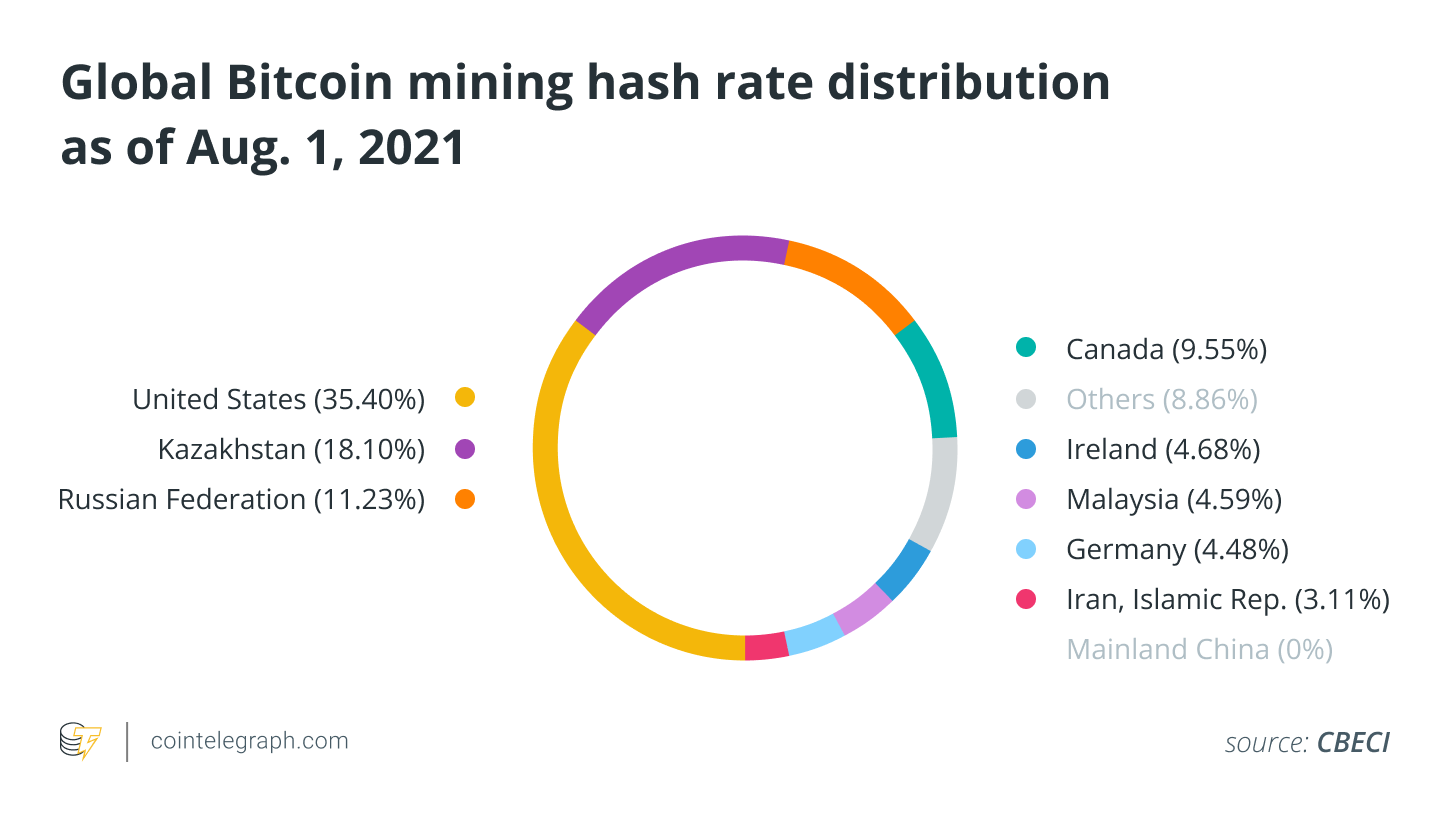 Bitcoin mining would eventually drop in Kazakhstan, mainly due to unsustainable power subsidies, as expected by Phillip Ng, vice president of corporate development at the data center company Soluna Computing.

Another reason for Kazakhstan to potentially lose its BTC mining leadership is the country’s reliance on the oil and gas industry, according to Origin Protocol co-founder Josh Fraser.

“Countries that rely heavily on those energy sources for crypto mining could see a drop in hash rates due to increased prices or state intervention,” Fraser told Cointelegraph, citing the ongoing geopolitical tensions and their impact on oil and gas prices.

“I would expect the United States, Canada, and Germany to somewhat increase its share of global hash rates due to high availability of renewable energy and very high recent growth in hash rates. I would expect Russia, Kazakhstan, and Iran to drop a bit,” Fraser stated.

As previously reported, Kazakhstan experienced some significant hash rate instability due to political unrest in early January, with the country’s presiding cabinet resigning and the government shutting down the internet for several days. Political unrest alongside potential energy price hikes and new crypto mining taxes would certainly make Kazakhstan a less attractive jurisdiction for miners, according to David Lesperance, managing partner and tax adviser at Lesperance & Associates.

“With Kazakhstan contemplating raising taxes on crypto-miners, I think that you will see the miners who were not already spooked by the recent internet shutdown having yet another reason to look for a better long-term location for their operations,” Lesperance told Cointelegraph.

He added that crypto miners need to find a jurisdiction that meets several criteria for long-term success, inducing stable green energy supplies with predictable long-term pricing, the rule of law to protect operations, politically stable jurisdiction, and others.

Related: Mining worldwide: Where should crypto miners go in a changing landscape?

Some Chinese crypto mining giants are already showing signs of a potential u-turn of expansion in Kazakhstan. BIT Mining, one of the largest BTC mining companies that relocated operations from China to Kazakhstan in 2021, is scrapping some of its crypto mining plans in Kazakhstan, according to a Feb. 17 filing with the U.S. Securities and Exchange Commission.

“The Company has terminated its data center construction plan in Kazakhstan, which was announced in May 2021, due to the unstable local power supply,” BIT Mining said in the filing. The company added that it still runs BTC mining machines with a total hash rate capacity of 292.7 PH/s in the country.

A retest is expected, but most analysts expect Bitcoin price to extend much higher

Acid, Bitcoin mining and a bad trip to North Korea